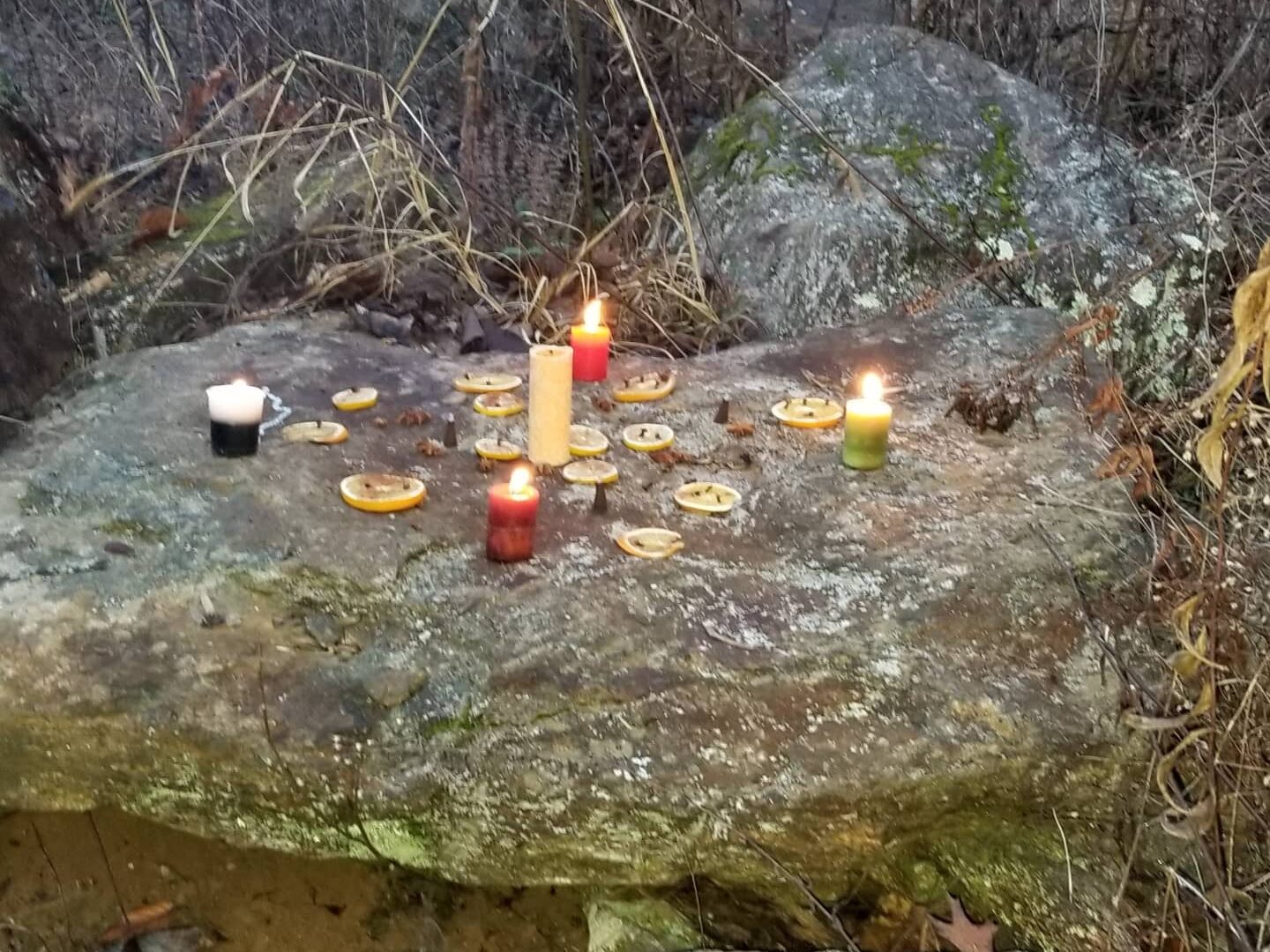 Now that I live in my own forest in southern Appalachia, it’s time to turn my back on humanity and become the forest witch we all learned about in fairy tales. Minus the baby eating. Eww.

The turning my back on humanity is relative, of course. I don’t have local friends yet, and the only family that lives in this town won’t speak to me because 1, I’m “a liberal” and 2, I called out my parents for abusing me on Facebook. Their loss.

The local population are not the kind, insular community I remember from growing up here. It’s a ruby red area and people have gotten mean. No worries. I have good family in the greater area and lots of online connections.

Meeting The Spirits Of This Place

I’ve been working on this since moving in in July – before that, actually. The first thing I did, when we decided to make an offer on this property, was come here and make an offering. I burned juniper and pine, and asked the spirits of the land if I could live here. I told them what I wanted to do here and asked if that was ok.

The answer seemed to be yes. Our offer was accepted and we moved in at the end of July. Right away I began spending time outside with the spirits, making regular offerings (most days it’s cornmeal and butter, sometimes with an addition of honey, brown sugar, and/or tobacco).

Previous owners left trash all over the property so I’ve made a point to start cleaning that up.

I’ve set up multiple bird feeders and keep them stocked, so that I’m helping to take care of the wildlife. Besides a slew of birds I have squirrels, chipmunks and even a rat (who turned out to be too cute to kill when I spotted him on the deck) enjoying the bounty.

I constantly tell these spirits I give them honor and blessings. I say that I want to make this a happy and productive place for them. I ask for guidance as I begin making changes.

Most importantly, I listen. It does absolutely no good to roll up on a place and start telling spirits that have occupied that place for possible millenia how it’s gonna be. At best they’ll ignore you. If you’re lucky you’ll find yourself stumbling around in a thoroughly unenchanted-feeling landscape.

But the worst-case in this scenario is truly bad. Because the spirits of a place can fight back. They can make your life miserable and more. Best to be friendly and make allies and not enemies.

So let’s talk a minute about conjuring. A lot of ceremonial magic is about calling forth spirits, binding them, compelling them to do your will, banishing, etc.

I don’t like to work that way. It’s not that I don’t think I have the power, it’s just not how I like to roll. I’m not interested in forcing anyone to work with me- or even like me, for that matter.

When I work with spirits, I want to do just that: work together. I don’t want subjugated genus locii doing what I order them to because they have to. I want partners who want to help me. It’s a nicer, easier way to live, and more effective to boot.

In other words, allies are infinitely better than servants.

Taking The Next Steps Of Spirit Relationships

So I’ve been making offerings for a good 7 months now, without ever asking for anything in return. I’ve spent time on the property and spoken respectfully. I’ve shown them that I care about this land.

Now I’m ready to kick things up a notch.

It’s supposed to be unseasonably beautiful this weekend – sunny, and mild even overnight, with lows in the 50s. So my plan is to go out into the woods, away from the house, and camp out. To spend a full day and at least one night just being in the woods.

I want to know how the mood changes at night away from the house. I want to know what animals come out. Most of all, I want to have an experience with the spirits of this mountain and forest.

I’ll be making more offerings: water, incense and more corn meal and tobacco. Whatever I eat, I will set out a portion for the spirits. And I will spend as much time as possible meditating and opening myself up to messages.

That’s the plan at least. Unless my CPTSD interferes, I’ll set up camp Saturday and hopefully stay till Monday morning, minus occasional trips inside for the bathroom and such.

Wish me luck, and check back to see how it goes.

What are some ways you’ve gotten closer to the spirits of your place? Let us know in the comments!