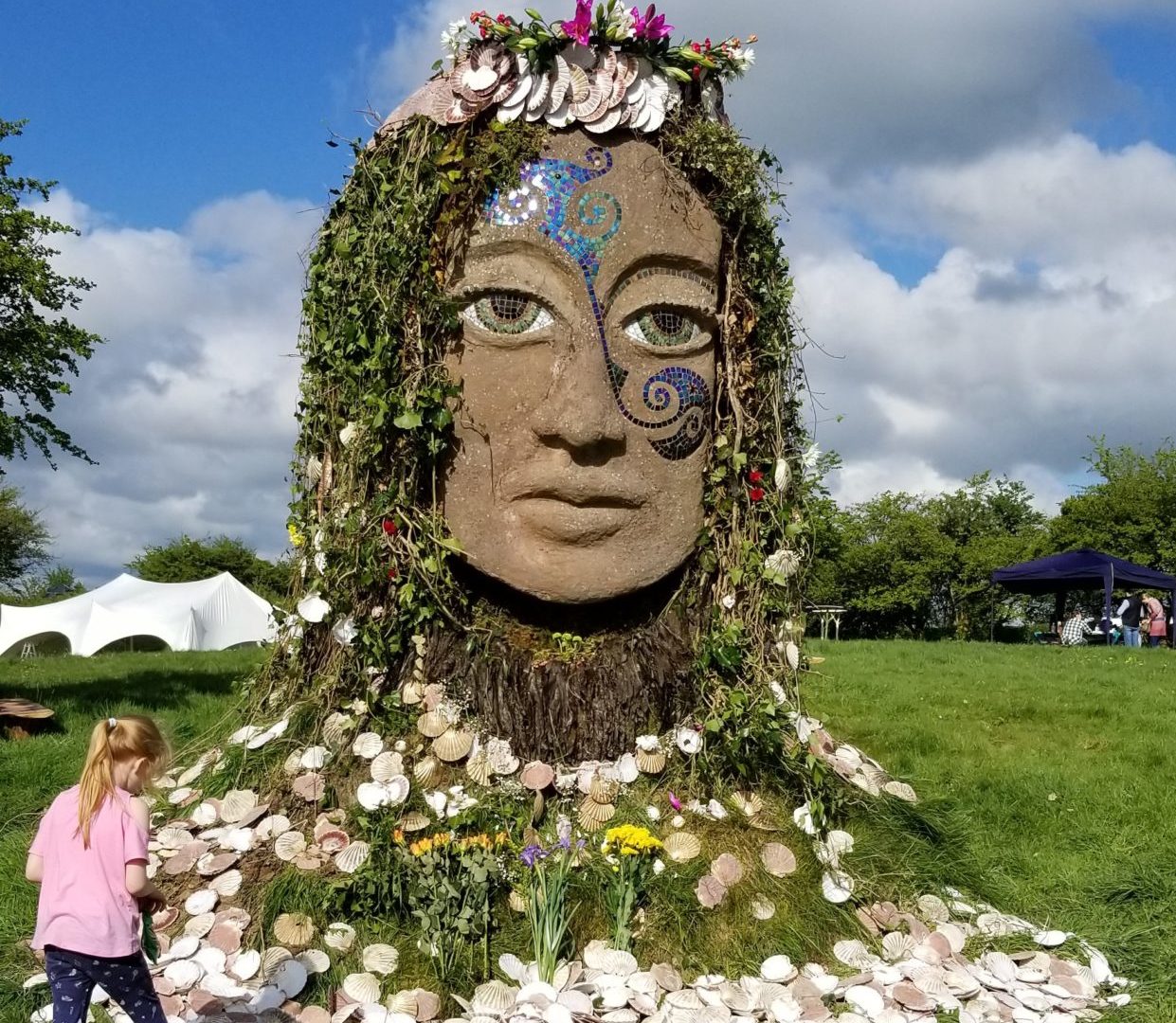 When our ancestors stepped outside, they saw a world teeming with spirits. Trees, stones, rivers, plants – all were embodied by living beings that could visit good or ill upon the human population. All “objects” or material phenomena were seen to have agency – they acted independently and made their own free choices. Our ancestors saw little distinction between the world of spirit and the corporeal or physical realm – in their eyes everything had a living soul.

Today, anthropologists believe that animism is the oldest form of human religion – nearly every society worldwide has a history of animistic belief. The idea was so intrinsic to everyday life that words for “animism” and “religion” were only created by modern scholars. To our ancestors, a world full of conscious entities, and daily rituals to engage them, was just reality.

Today you may hear people complain that our modern world has been dis-enchanted, that the magic our ancestors saw all around them has somehow disappeared. Where are the nymphs, water sprites, tree sprites, fairies, elves, trolls etc.? Have they been driven away by modern technology?

Many indigenous groups (and many modern Pagans) see and interact with these spirits to this day. And not just in rural or wilderness areas – it is possible to connect with spirits of trees or creeks and others in urban areas. If trees have a spirit in a wild forest, why would a tree planted beside a city street be any different? Perhaps what has really changed with modern times is our ability to recognize and connect with the spirits all around us.

Perhaps it’s not the world that needs re-enchanting, but us.

Before we dismiss the ideas of our ancestors as “primitive,” let’s take a look at some of the most cutting-edge science known today: Quantum physics.

The basic idea behind quantum physics is the concept of energy. At the sub-atomic level, everything that exists is energy in a constant state of moving, vibrating, spinning, acting, reacting, changing to everything that goes on around it. This goes for the desk under my computer as much as for any boulder sitting beside a mountain river. If you look deep enough, both consist of energy.

How? Think of an atom as being the size of a baseball stadium. The nucleus of the atom is at the pitcher’s mound, and electrons are circling around this center. Their orbits are several meters apart, and individual electrons are spaced evenly apart as well. That’s a lot of empty space! Yet when we see millions of atoms that have come together to form, say, a tree, we see a solid mass. This is because of the speed at which the atoms are flying around the nucleus. Just like a long exposure image of traffic on a highway, the electrons in a tree atom are flying so fast they appear to us to be solid matter.

Meanwhile, these sub-atomic particles act in a way that seems counter to the reality we perceive in the “full size” universe. For one, particles are not always particles. If you measure them as waves (like sound waves or light waves), they act like waves. But if you measure light or sound (or particles) AS particles, they act like particles. They are neither wave nor particle, and both at the same time. (Sounds pretty Zen, huh?) You cannot ever determine the exact position of a particle in space at any given time, only the probabilities of it being in a certain place at a certain time. Meanwhile, the act of observing particles actually influences the outcome of experiments.

All this together leads scientists to speculate that the nature of the Universe at the quantum level is a process of possibilities, but not definitely predictable, and that everything we see, either living creatures or so-called inanimate objects, is in fact a vibrant, living force. This living force cannot be separated from any other living thing or object, meaning there is just one complex, unified whole.

In other words, not only does the tree beside the stream HAVE a consciousness, that consciousness IS the basic fabric of reality, and is the same as the consciousness at the core of YOU. You, after all, are also made of atoms. Your body contains not only billions of them, but also is a conglomerate of systems – digestive system, nervous system, etc. – chemicals, bacteria, and more. We don’t consciously regulate these varying systems, yet together they make what we consider to be our individual being.

So maybe animism isn’t so primitive after all.

They Communicate With Each Other. Why Not Us?

If you’ve ever gardened, you’re probably familiar with the fine, hairlike roots plants and trees spread underground. Scientists call this mycorrhizal networks, and believe it is the mechanism plants and trees use to communicate with each other and with symbiotic fungi.

It turns out, forest trees have evolved to live in cooperative, interdependent relationships, maintained by communication and a collective intelligence similar to an insect colony. Trees share water and nutrients through these mycorrhizal networks, and also use them to communicate. They send distress signals about drought and disease, for example, or insect attacks, and other trees alter their behavior when they receive these messages.

To communicate through the network, trees send chemical, hormonal and slow-pulsing electrical signals, which scientists are just beginning to decipher. Edward Farmer at the University of Lausanne in Switzerland has been studying the electrical pulses, and he has identified a voltage-based signaling system that appears strikingly similar to animal nervous systems. Monica Gagliano at the University of Western Australia has gathered evidence that some plants may also emit and detect sounds, and in particular, a crackling noise in the roots at a frequency of 220 hertz, inaudible to the human ear.

But is it audible to the human spirit?

Connecting With The Spirits Around Us

Our ancestors were conscientious about placating the myriad spirits they encountered every day. Beings with agency are not all benevolent. They didn’t just make offerings and perform rituals to feel connected with the spirits around them – they recognized that much like wild animals, these beings have their own agenda. Sometimes that agenda is harmful to us. The rituals and spells that have survived to this day are more often than not about appeasing spiritual neighbors to prevent harm.

An enchanted world may be more dangerous, but it’s also more alive. It’s full of infinitely more possibilities. Opening ourselves up to the hidden beings that share our space can only lead to a fuller experience of life. And that’s before you consider the mental health benefits of being more connected to nature.

A tree like the one pictured here can be a couple hundred years old or more. What has it seen, and what has it learned as it stood for all that time? What does it know about the stars, the clouds and sky? If it is communicating to the trees around it, and if at the deepest level it is made of the same consciousness as we are, then it is bound to have lessons to teach. What wisdom will we glean by learning to listen to what it has to say?

Closer Than The Gods

Back to our ancestors, there’s evidence that much more day-to-day practice involved the local spirits of place than it did Gods and Goddesses. Anthropologists think that generations of people engaged these spirits long before humanity began calling on gods. And even once societies have fully fleshed-out pantheons and mythologies, it is the local spirits of place that do most of the protecting and blessing. It’s just a matter of proximity and pragmatism.

So even if you have a practice that honors one or more deities, it’s worth adding some recognition of the spirits closer to you. And you build these relationships the same way you do with the “bigger” deities: Pay attention to them. Meditate and observe them. Make offerings of time, energy and substance. Watering your flowerbed can be an offering to the spirits of your flowers, and the spirit of your land. Feeding the birds or other wildlife can as well. And a little cream or butter to keep the “good neighbors” happy never hurt, even if you want to think more than twice before asking them for anything.

Before long, you may find yourself living in the same type of enchanted world as your ancestors.