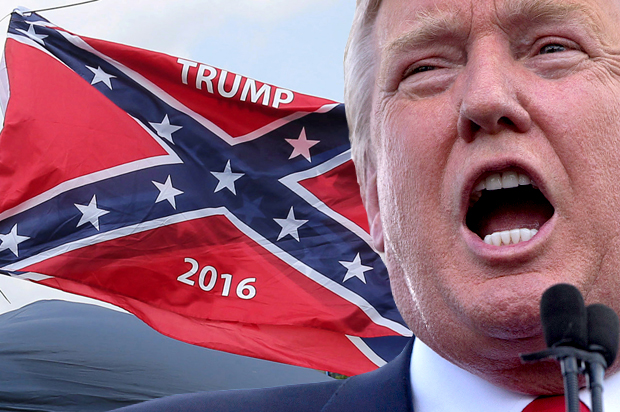 My Dad Goes Too Far

This article originally appeared on Pentecostal to Pagan November, 2016. It is the story of the first time I ever REALLY stood up to my father. CW: Verbal abuse, narcissistic manipulation, reference to sexual assault. Oh, and politics…

So, my dad is a big Trump supporter. He’s also a huge Duke fan, so clearly he has issues with judgement.

But to be quite honest, (again, thanks to that anonymity I’ve got mostly going around here) he’s always been a racist. I repeatedly got in trouble as a kid for the sin of having black friends. The bible commands, I was told, for the races to remain separate. Tower of Babel and all.

So I wasn’t really surprised that he enthusiastically jumped on the Trump Train. For a while, I thought it would be like his Duke fandom – something I wholeheartedly disagreed with, but would just have to overlook for the sake of family peace. It’s not like he hasn’t always been a straight-up N-word-using racist. It’s not like I’ve ever let him think that’s ok in my eyes.

First, I have to tell you some background on my family. My dad is an alcoholic, compulsive gambler, and emotional bully. My mom is an enabler who blamed me for all of his transgressions. Literally – she said to my face on more than one occasion that if I just spent more time with him, or didn’t “act the way you do” that he wouldn’t feel the need to get so drunk so often and slap her around.

As you can imagine, I’ve eaten a LOT of shit over the course of my 45 years on earth. As an adult, I’ve let a lot of stuff he’s said and done slide because, well, whats the point? It’s not like pushing back is going to teach him anything. All that happens is he gets offended, acts like a martyr with backup from mom, and you either get a call in a few weeks where he acts like nothing ever happened or you have to kiss his ass to make up.

But He Picked A Fight With Me

But last week I spend the day at their house, sitting with my 97-year-old grandma (the only grandparent I still have among the living) while my mom had some medical tests done. I arrived at their house to discover not just a Trump/Pence sign but a Pat McCrory sign in the yard. I felt like just pulling into the driveway made me look like a racist homophobe.

But I didn’t say anything. Even when I ran out to get Grandma and I some lunch, and noticed just how many African-American neighbors my parents have, and how many were out and about in the neighborhood on such a beautiful fall day. I wanted to tell them all, “I promise I’m not racist, I just have to visit one today,” as I pulled in beside those yard signs. But that would be kinda obnoxious, too.

Finally my parents came home, and I was ready to get out of Dodge. (Side note, it’s a shame his toxicity keeps me from spending more time with my Grandma. She’s about to turn 98 and can’t possibly be around a whole lot longer. And she’s so sweet, and has so much cool life experience. But it’s hard to get time with her without having to engage him.) Case in point,  Dad just wouldn’t let leaving happen. “I’m surprised you were willing to come in the house with my yard signs out there,” he said proudly.

“I almost didn’t,” I replied and tried again to leave. But he smelled blood. “What??” he kept asking despite me saying several times I really didn’t want to talk about it. He literally blocked me from exiting, gleefully demanding a response. Finally I said, “I’m just sad you’re willing to vote for a sexual predator.” And got a full explosion of what an “evil woman” Hillary Clinton supposedly is. I could just see Dad at a Trump rally gleefully chanting “Lock her up!” and “Trump that bitch!”

So yeah. I was pretty upset as I left. And on a whim, I pulled the car over to the curb in front of their house, popped my trunk, and jerked those damn signs out of the ground and made off with them.

How’d That Go? Not Too Good

I’m not sure what I was expecting – probably something along the lines of our annual Duke/ UNC trash talking through March Madness. Instead, the next day when Dad noticed the signs gone, I got a very morally-high-horse call about “taking away my rights to support my candidate.” Like, really? Like the signs weren’t free, and you can’t get more? Like it’s all that? He even mentioned that he “didn’t want to call the police.”

He was drinking so I just admitted I’d taken them and left it at that. He demanded I return them, which was already not likely to happen before he went all Holy Martyr on me.

Several days later, I got an all-caps text from him saying he wanted to have his signs back in the yard that day.

Now, here’s where I’d normally cave. I’d normally try to minimize the rift, not say just exactly how much he was hurting me or how upset I was no matter how much I was or wasn’t justified. But damnit, I spent a whole week or more reliving trauma I thought I’d long forgotten because of Donald Trump and his excusers. So this time I stood up and right or wrong told my dad just exactly what I was thinking.

I returned the text and graphically told him about my experience being groped at 14 – which he knew nothing about prior. I told him that was only the first of many times men did to me what his candidate brags about. I recounted how the denials, the minimizations had reopened trauma I’d thought long buried. And I recounted seeing Republican man after Republican man disavow Trump because “I have a daughter that I respect.”

“Silly me,” I said in the text, “I WANTED a dad that gave enough of a shit about the fact that his daughter has to navigate a world full of men like Trump to not support a sexual predator. So I guess we are just both gonna have to want.”

The Gauntlet Was Thrown

Needless to say, this did not go over well. Not long after sending the text, I got an angry voicemail from him (because I wasn’t going to give him the chance to bully me in live conversation) that literally started off with how “disappointed” he was in my tone. Still firmly on his moral high horse, he “apologized for what happened to you” (as if that was in any way his fault or anything he had a right to apologize for. But apologizing for something he’s NOT responsible for is meant to deflect from anything he might ACTUALLY be responsible for.) He said he didn’t think it was fair for me to be mad at him for something he didn’t know about. Because every daughter wants to her JUST how disappointed her dad is when she tells him she was sexually assaulted. Because of course that information is ALL about HIM.

I ignored another call about 45 minutes later. This voicemail informed me that if I couldn’t bother talking to him, since he loved me and all, that he’d just never call me again. Ever. Because I wouldn’t answer anyway.

Originally, I ended this article there as that’s where things stood at the time. I credited my relationship with The Morrigan for giving me the backbone to stand up to him, right or wrong. I admitted taking the signs wasn’t the best thing to do, but HE WASN’T LISTENING TO ME. At least I’d finally gotten his attention.

In the weeks that followed, his reaction was predictable. Silence for about 3 weeks, then a “Happy Thanksgiving” text, which I ignored. Then a “happy birthday” text in early December, which I also ignored. My mother texted that I shouldn’t ignore him that way, and I responded that I deserved an apology, and there would be no moving forward without one. I honestly think it was the first time in his life my father had ever bumped up against a boundary that wouldn’t budge.

A lot has happened since then. Those are stories for other posts.