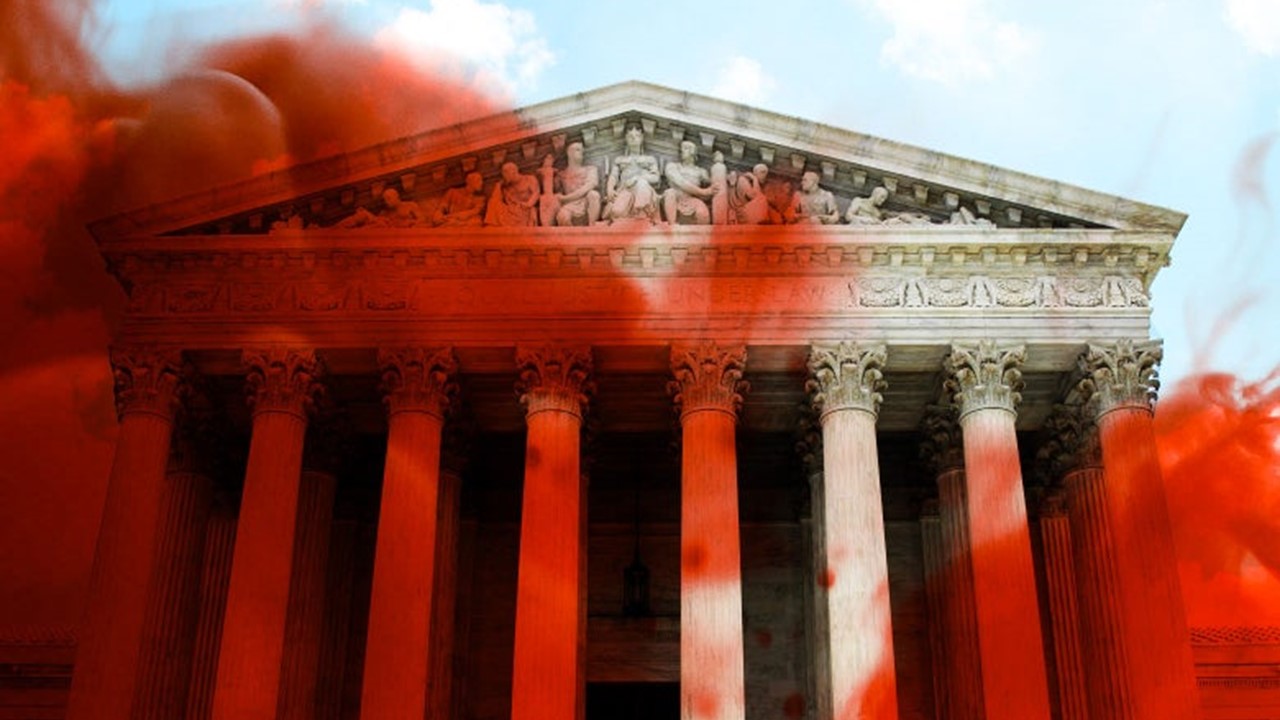 It’s been a rough few days. A good friend of mine, venting rage and frustration about the general loss of bodily autonomy and civil rights we’re witnessing said something along the lines of, “I know love wins and all that, but right now I’m angry.”

They were posting on social media to an audience that included family members, people who are Christians. So like so many female-presenting people throughout history, they felt the need to couch their anger. To apologize for it in advance. To soften it, hedge it, make it palatable to people who even then supported the very thing they were venting righteous fury over.

Elsewhere, over on the bird app, I saw an image purportedly of shopkeepers in DC boarding up windows in anticipation of protests. Comments were disparagingly saying “only one party throws a riot when they don’t get their way.” Ignoring the absolute hypocrisy of that bullshit (January 6, anyone??) it goes back to the same idea – don’t get upset. Don’t you dare get out of line, or be too angry. Because that just won’t do, and then nobody will take you seriously. Us right wing white men will laugh at you.

These same right wing white men had an absolute hissy fit when asked to wear a piece of cloth on their faces in order to keep themselves and other people from dying of a deadly disease. It was “their body their choice” then. It was all about their freedom in the face of tyranny then. Over a piece of cloth.

Did they care how silly they looked getting angry? Did all the Karens in Target and Whole Foods get embarrassed when they wound up on Tik Tok throwing stuff because they were told to wear a mask?

Clarence Thomas says he wants to consider the cases that legalized birth control, “sodomy,” and gay marriage next. Lemme tell you a story.

I am 51.5 years old. I haven’t had a uterus for the last 18 or so of those years. Before that, I had a condition called Polycystic Ovarian Syndrome, plus a pretty decent case of endometriosis. PCOS means that ovulation starts – an egg begins to leave the ovary by forming a cyst, but never goes any farther than that. Over time, multiple cysts or partially -released eggs form on the ovaries confusing the hell out of your hormones. My period never knew whether it was coming or going. I had mood swings from hell wherein I would go into rages over the stupidest things. At the time it felt perfectly justified, until the hormones wore off and my head cleared and I just felt stupid. I got to where I’d recognize it coming and my husband would take the kids to his moms house for the rest of the day.

In addition, my periods began lasting up to 3 weeks, with one week off in between. They were so heavy I became anemic. Oh, and remember the endometriosis? For anyone who doesn’t know, that means part of the buildup that’s supposed to support a baby if it happens grows on the outside of the uterus. It is incredibly painful. The upshot is, I was eventually bedridden for weeks at a time.

I went to multiple doctors trying to get relief. I wanted a hysterectomy. I had two children and was 30 years old. Still they refused. One male doctor, after I told him I was taking upwards of 10 Ibuprofin at a time told me it was not a problem because “you can take Ibuprofin for it, but not more than 2 at a time.”

Finally, I saw a female gyn. After wishing a righteous case of kidney stones on that doctor, she put me on hormonal birth control to stop the bleeding. It took 3 pills a day for a while to make it stop. It took 3 different submissions to my insurance to get the hysterectomy approved. But finally, I got it.

6 months later, my husband looked at me in amazement and said, “Wow, you’re so stable now!”

Clarence Thomas wants the government to have a say in whether or not I should have been able to take those pills to stop the bleeding. Bleeding that was making me anemic and making me take ridiculous levels of otc pain medication. That was ruining my quality of life and keeping me from taking care of my children. But I was at least married to a straight male who supported it all and would have given permission if necessary. Gods forbid I’d still been single with those cramps and that blood and these motherfuckers poking their nose into my medical chart. Gods help all the younger women out there today who will be in my shoes in the next few years, or have ectopic pregnancies, or …. I can’t even go on.

Because people are going to die. 100% of ectopic pregnancies are fatal without an abortion, and several states have attempted to pass “no exceptions” bans. So far, all bans do include exceptions for “medical emergencies,” but if poor people with already substandard healthcare need an emergency abortion in a state where doctors are prosecuted for performing them, well… we know what’s going to happen.

In fact, right now, in Texas, getting the medication to abort an ectopic pregnancy from the pharmacy can be difficult to impossible, even though the law specifically says they’re allowed under this circumstance. But pharmacists are afraid of the risk.

Already the number one cause of death for pregnant people is homicide. This will undoubtedly go up. As will suicide.

So do tell me, why on earth should anyone who has or ever has had a uterus or the ability to get pregnant give one flying fuck about decorum right now? Please do tell me why we are not currently burning and breaking shit en masse? White men gonna laugh at us? They not gonna take us seriously?

And do not forget, those of you who have never had a uterus are not safe, either. Gay? Your marriage or right to marry is going away. Like oral sex? Oh, did you not know what “sodomy” meant? It doesn’t just mean THAT. It means ANY “deviant” sex act. And Thomas didn’t mention it, but they’ve been coming after trans people and getting VERY bold and dangerous with that. You think the birth control thing is JUST about birth control? If they can tell cis white women they can’t take The Pill they can damn sure take away every trans person’s hormones, no matter how long you’ve been transitioned.

They. Are. Coming. For. Everyone. Everyone that isn’t Cis, white, straight, Christian and pro-patriarchy. I’d add male, which is probably obvious, but there are women who actually do seem to somehow like being the submissive wife. Whatever. I didn’t like it one iota.

So. Back to my friend, who felt the need (no shame, no blame, I understand her family situation) to couch her rage with “I know love wins, but-” This was my reply:

Honestly, what has love ever won? How many times in history have rights been gotten by people being kind and asking nicely and loving their oppressors? Show me one example of love actually winning and I will show you 5 of swords and blood and tooth and claw. Going high when they go low has got us here, on a steam train back to 1850. No. It’s not time for love.

Look, I understand why Michelle Obama said that when she did. Michelle Obama HAS to go high. Michelle Obama cannot, or could not, ever step out of line during her husband’s career. Those two had the absolute highest morals, never a whiff of scandal, she always went high. And still she was demonized. If she had ever truly punched back I cannot imagine what would have happened.

But the rest of us aren’t trying to get our husbands elected as the first Black President. We don’t have to hold ourselves to that kind of standard. For that matter, I really wish the rest of the Democrat party would stop trying to be the party of the high ground – they need to be playing as dirty as Mitch McConnel and fix this shit before we all wake up in 1850.

This is a blog about overcoming trauma on a pagan path. This week has been traumatic. Not just the news from SCOTUS. My youngest, who is newly out as trans, was harassed when ordering coffee at the Starbucks in a local grocery store we frequent. She didn’t tell me till it was too late for me to rip that cashier a new one. But two separate drag events were also harassed in NC this week – in Black Mountain, a harmless dinner theater drew protests, and in Wilmington the Proud Boys terrorized Drag Queen Story Hour at the library.

The dark moon approaches. How to overcome this type of trauma on a pagan path? The way the oppressed have always fought back: through witchcraft. I should have done this a few months ago when he was in the hospital and I thought to, but depression had other ideas. This moon cycle however methinks Justice Thomas may just be the focus of my attention. Wonder how the man who wants to take us back to 1850 would feel being (metaphorically, of course) introduced to a cemetery full of Confederate veterans?

Better yet, full of women who died before we knew to abort ectopic pregnancies or fetuses that had died, and aren’t gonna like knowing their granddaughters may suffer the same fate even though we do know better now.

They go low. Let’s crawl in some grave dirt.